Fifteen-year old Kinri Watson just returned from living in France for the summer as part of her Adolesco exchange.

“It’s really weird, like you’re two different people,” she says of her stay more than a year after hosting her French exchange “sister” Maelys in May 2015. “I also got to know a completely different Maelys!”

Kinri is a 10th grader at the Denver Center for International Studies (DCIS), where Geri Badler is the director of the Travel Center. Geri promotes Adolesco because she “loves the idea of the family-to-family exchange. It is personal and meaningful. I feel the Adolesco students that come here are well vetted, smart, and open to learning and sharing.”

It is typically adults like Geri with personal exchange experience who are the biggest advocates of foreign exchange programs. “I know the importance of cross-cultural exchanges and how rich an experience this can be, as well as the fact it is simply life changing” she says.

Ben Lev, who teaches Spanish at Credo High School in Rohnert Park, California, also wholeheartedly recommends Adolesco to his students. Ben does a little whiteboard math for his Spanish II class, “If you’re in my classroom for an hour a week for three years, that’s about 600 hours of Spanish. If you spend three months in Spain, that’s more than 1300 hours of Spanish – it’s like six years in the classroom – in three months!”

Because the travel and hosting periods of an Adolesco exchange are determined by the two families involved, children and teens can gain international experience without losing school time. Sometimes families will host one summer, and then send their child to travel the next, although not all Adolesco exchanges happen during the summer break.

“My exchange sister really wanted to come to school in the US,” says Kinri. “When I asked her why it turned out she wanted to see if the cafeteria is like in the movies, and she wanted to ride a yellow school bus!”

We sincerely appreciate the support of teachers and travel advisors who are willing to share our program with their students. Perhaps your school would be interested to learn more about Adolesco – contact us today! 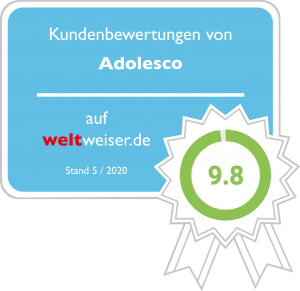